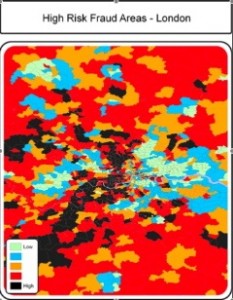 Credit-monitoring company Experian releasedÂ a report (pdf) ranking the Top 25 towns and postal sectors in the UK that are at the highest risk for identity fraud. Unsurprisingly, Experian finds, “LondonÂ remains the identity fraud capital of theÂ UK. Its residents are â€“ on average â€“ almost twice as likely as to fall victim to identity fraud compared to people living in the rest of theÂ UK.”

When reviewing postal sectors in London, Experian finds, “Residents living in the SW17 6 postal sector, which centres onÂ CollegeÂ GardensÂ in Tooting, southÂ London, need to be most wary of identity fraud. Residents living in this postal sector are almost fives times more likely than theÂ UKÂ average to become a victim of identity fraud.”Â Experian also notes, “More than 6,000Â victims sought help from Experianâ€™s victims of fraud team during 2007, compared to just over 3,500 in 2006. This represents a 66 per cent increase in identity fraud activity reported to Experian.”

Identity theft is on the rise in a number of countries. Last year, Australia’s Privacy Commissioner saidÂ her office’s survey found one in 10 Australians claimed to be the victim of identity theft.Â A 2007 Federal TradeÂ Commission report (pdf) estimated 8.3 million victims in 2005 (the last year for whichÂ numbers are available).Â

This entry was posted on Friday, May 30th, 2008 and is filed under Identification, International. You can follow any responses to this entry through the RSS 2.0 feed. You can leave a response, or trackback from your own site.